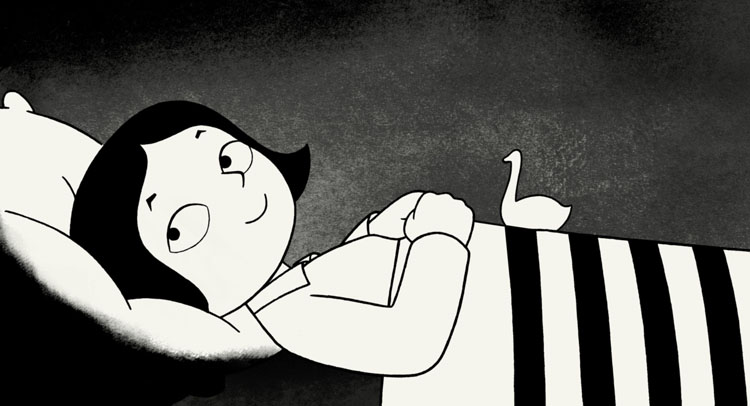 Persepolis is an animated film about being an outsider. The movie itself is a biography of Marjane Satrapi who grew up in Iran during the 1978 revolution. It is known in the first few minutes that Marjane is a strongly individual person by nature. She is a natural leader of her friends.  Before we learn that the people surrounding her are living on the outskirts of society from an idealistic perspective she is already an individualistic person.  Persepolis is in the theme of living life to the fullest despite its difficulties. Marjane witnesses a lot of difficult adult situations at a very young age including war, death and false imprisonment of her family members. Marjane grew up valuing the same ideals as her uncle and grandma. Marjane’s idealistic boldness is carried with her abroad and she found other outsiders whom accepted her. The scene in the bar where she is speaking about her beliefs and the importance of communism, to a boy who is ogling her, is a point of further exemption from contemporary society. Marjane experienced some falls as well, despite her background she wanted to be more accepted. She wanted to experience more life. The scene in the diner after Marjane tells another man that she is French, and overhears a group of girls talking about her origins, Marjane’s true boldness comes out and she immediately gets proud of her origins and announces that she is Iranian. Most of the movie is based in the conflict in Marjane to be accepted and retain her idealistic boldness Persepolis’ mental strength is notable. The adult situations that she was forced into from a young age prepared her in a way to survive abroad. Marjane experienced the ups and downs of life in lieu of her past. She still falls in love and experiences loss. Her ability to go from house to house whilst being an outsider speaks volumes about her mental strength. That is because she manages to be comfortable in different and uncertain situations. That is a likeable trait. For most of the movie Marjane knows that she won’t be accepted and she doesn’t want to be accepted and she is learning to be OK with that.

When Marjane returns home and she learns of the new regime and how different Iran is. She looks different and has learned a lot however, she is still succinct with her parent’s ideals and that is a likable trait about her.

Persepolis is an animated monochrome film and I think that is that way because it allows for a lot more expression. A lot of the differently composed scenes could be done in live action; however, animation was easier but it fit Marjane’s overall message and expressiveness of her life. Black and white represents the outsider that Marjane and her family share. She sees her own ideals as a more important thing to protect than fitting into society and that is a different view than what is common. The expressiveness thrives at important events in Marjane’s life. In the beginning when her father tells her the truth about the shah, the only light in the scene is the white of the characters, while everything else is blacked out and that sort of visual them plays throughout the film with an expressive intent. Tom Prasch writes “Satrapi and Paronnaud say they were inspired in part by silent-era German Expressionism, which is evident in the film’s dynamic gouges of black. (2007)” The overall look of the film was aimed at retaining the look of the graphic novel too.