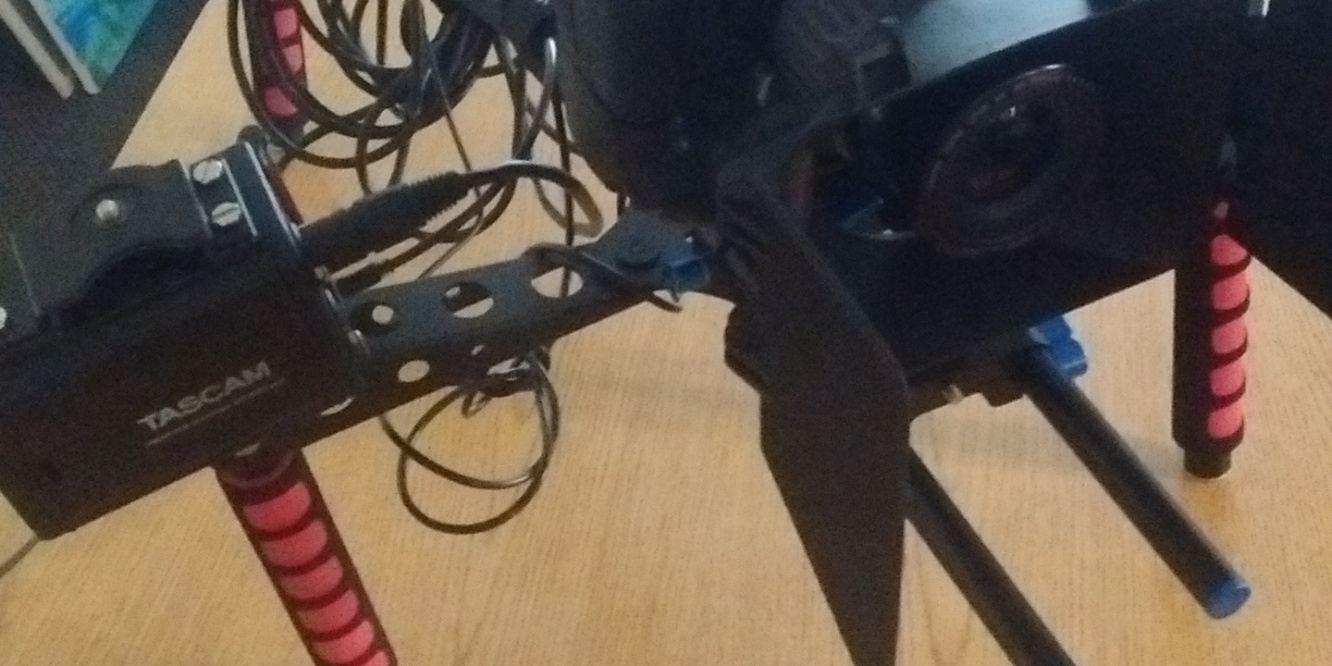 Compact, Aerodynamic, Recorder, and Long Apparatus or C.A.R.L.A, for short is my new money maker. She’s built like a petite, but she can handle an absurd amount of work.

Let’s get into the technical details and an in-depth review of my first dat… project with C.A.R.L.A.

My first project with this system was a Roller Derby game by the Harbor City Roller Dames. Not a paid gig, but an educational one. I used this opportunity to analyze all 5 distinct characteristics of C.A.R.L.A: Mobility, Assembly, Performance, Modularity, and Overall.

Mobility: I used my camera bag which is big enough to fit all the small stuff. Mountable lights, lenses, cables, etc. I also use the bag that came with a lighting kit I bought shortly after my investment into the camera rig. It’s long and perfect for the frame to fold into. I had the intention to keep as much components fastened to the system as possible. I did this by taking the shotgun mic off (AT-8035) and the camera off to put in a safer place. I left the slate on the camera so it could be slid on easily at the show. The power bank stayed strapped to its spot on the underside of the frame, near my Tascam DR-60 MKII. My mic case, tripod and rig could fit in the re-purposed light kit bag.

When I got to the venue, Wessman Arena, I didn’t time the assembly of the rig because it was a bit wonky. Let me explain, estimating I’d say it took about 30 minutes. The ease of assembly went well each 1/4-inch bold fit well enough. The battery on the underside did interfere with the pan handle of the tripod though and they didn’t get along all night. I put the shock mount on the left side and slid the camera onto the tripod mount. The tripod itself didn’t perform well at all. It was to light for the rig, it lifted off the ground at times when I was focused on the action on the camera monitor, and I couldn’t leave the rig on the pod by itself. It got all droopy and wanted to fall over backwards a few times. Overall assembly went well, but the collaboration didn’t work as well as I expected.

This is where it gets good. I designed this rig around a canon T3i. I attached a double battery pack to it and occasionally a light on top. Audio from the Tascam fed into the canon, but I skipped that as there is an unsolved anomaly where the camera audio has too much hiss in the noise floor, not a big issue since I sync in post anyways. The batteries lasted until the end of the game which was about 2 hours, and almost perfectly cut out when I went to pack up. My 64 GB SD didn’t overheat. I have had that issue in the past filming concerts, but a higher-class SD seemed to solve that issue. I used a 40-200 mm lens to compensate for the scenes I’d be shooting. I used the zoom and focus a lot to follow skaters around the rink. The tripod worked well enough to pan, though it is not meant for video cameras, let alone a rig like C.A.R.L.A. My mic worked wonderfully. My At-8035 dominated the scene, even though it was an echo chamber sound quality in the arena. My mic picked up a lot of what was happening on the rink, things like skates scraping the floor, and yelling of players. There was a muffled inaudible pa that was used by an announcer the whole time and I can’t tell you a single word he said and it wasn’t of much use to me, except at the beginning when players were introduce, but I’m not worried about it since this is an educational gig. The mic was super sensitive and I maintained the gain on the Tascam between six and seven o’ clock the whole time, though in most settings it’d be at about 11. I shot at 1280 x 720 x 60 fps to get as much of the fast action as possible. I intend to upscale it to Full HD later. Overall, the moving parts of this rig kicked a lot of ass that day.

The amount of versatility on the rig itself is awesome. The intention for this investment was meant for shooting from the shoulder and achieve great sound by myself. I would be the sound and camera guy. And I think it worked. The sheer number of knobs and holes on the rig itself is vastly superior to any rig I’ve ever had. The shift from panning on the tripod to shooting from the shoulder was nearly seamless. Every part of the system shined and worked effectively. The rig is lightweight, versatile, and future customization is seemingly endless. I intend to get plenty of use out of this rig.

Here are the links to all of the products seen in this post: Camera: https://www.amazon.com/Canon-Digital-Camera-discontinued-manufacturer/dp/B004M170YC/ref=sr_1_1?s=photo&ie=UTF8&qid=1493403565&sr=1-1&keywords=canon+t3i