Yahoo! My Flickr account is up and I have uploaded just about all of my edited photos that I’ve taken personally ( Commercial photos are technically not mine). 200 and some images are organized into albums by my girlfriend Cyndee who some Facebook commentors would call my ” almost wife”. Flickr has a unique feature called Photostream which allows all of my images to be displayed on one page and scrolled through. But why am I nervous? Because hackers have scrolled through Yahoo’s data so many times that I think the site has CyberAids.

The title of this CNN Money article is all I need: ” Every Single Yahoo! Account Was Hacked”. That’s right Yahoo is a hacker’s play toy. Their security is a hobo holding a sign that says ” please don’t steal my stuff” standing in front of a 3 billion capacity stadium with no doors. Yahoo! is a joke, I’m pretty sure hackers get their first internship, their first tutorial in cyberhacking 101 by shafting Yahoo! with a keyboard. It’s pathetic. According to Wikipedia ( Suck my dick college professors) Yahoo! was hacked by separate entities in back to back years: 2013 and 2014 by ” Unauthorized toddlers with Fisher Price laptops”. Ok I ad-libbed that a bit, though back to back years being hacked means that Yahoo’s IT department consists of the cast of Workaholics. It’s pathetic I’m calling Yahoo! ” Hack Me, Daddy” from now on. 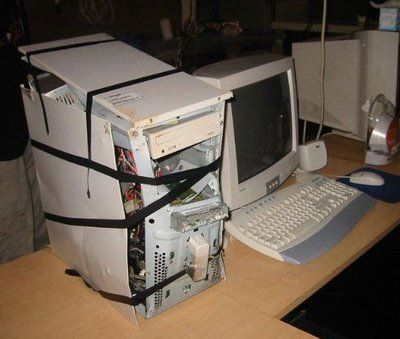 (Actual image of the HackMeDaddy.com IT department.)

According to HackMeDaddy.com’s stock exchange, the announcement of the data breach on December 16th, 2016 about the 2013 & 2014 hacks, did little to the companie’s value. In fact, the closing value of HackMeDaddy.com on the day of the breach announcement was .23 points higher!. By that pattern, I think HackMeDaddy’s new name ought to be the one I chose because people actually like when it gets hacked. Like a comedian selling tickets HackMeDaddy.com sold shares in exchange for laughs, but I digress.

That is why I’m nervous about having a Flickr account. HackMeDaddy.com was about as relevant as AOL before it was hacked to shit and I give about as much attention to Flickr asking me to use a HackMeDaddy email address as I do to Internet Explorer asking to be my default browser! I did ultimately sign up for a HackMeDaddy owned Flickr account with my Gmail because Google has slides n’ shit in their office.