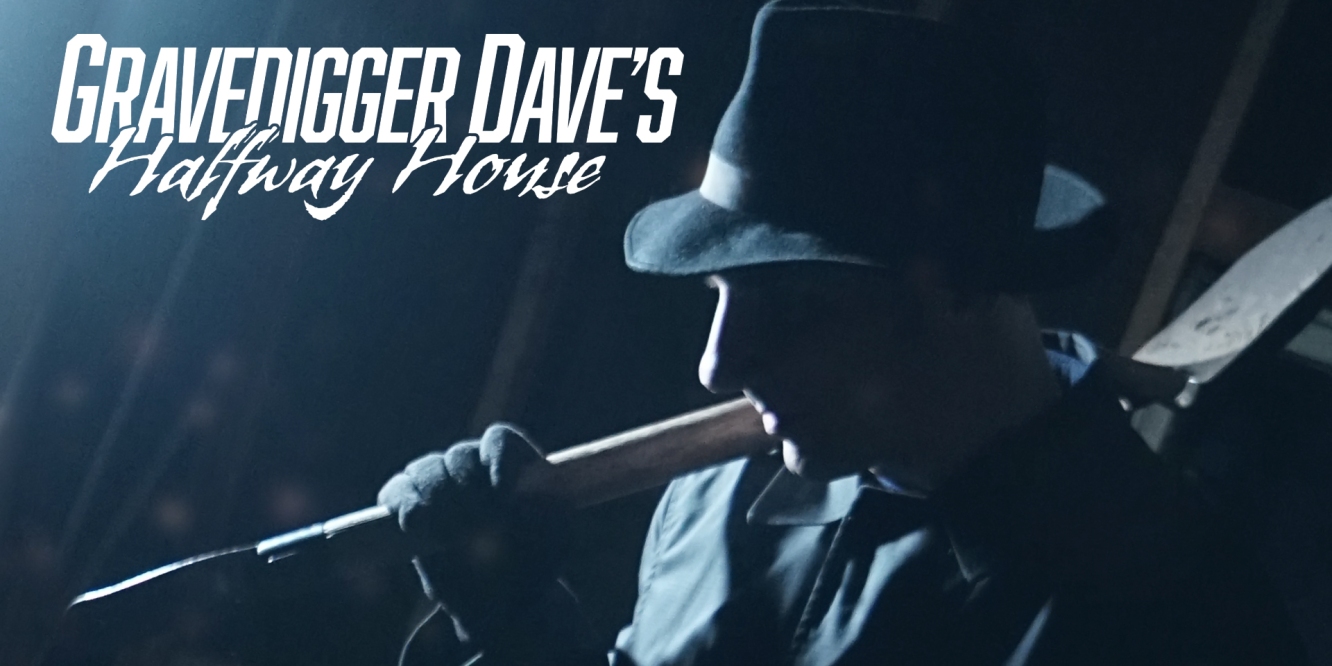 Gravedigger Dave’s Halfway House is shifty. Shifty in it’s point of view, it’s pace, it’s style. It starts out fast and witty with Gravedigger Dave, then it completely shifts to a camera operator interview style story and fizzles out with unending drone music underneath rambling talking heads.

Jump cuts, shifting points of view, and steep shifts in energy and pace don’t mar this film, but instead it feeds into horror tropes of unease. I felt like questioning not just the fact or fiction paranormal events, but the inconsistent editing techniques that actually pushed me further into the immersion of the film.

Gravedigger Dave, played by Matt Rasmussen, hosts a narrative based adventure about paranormal experiences and investigators around the Duluth, MN area. Rasmussen’s performance resembles a faint memory of Beetle-juice as a king of purgatory kind of character. He is a fast talking, cliche spewing, perverse smiling character. He runs a halfway house between heaven and hell. As all ghostly themed shows and movies do is subversively reinforce the constructs of religion by telling spooky stories of demons and angels which is probably why ghost hunting shows are so popular.

The story goes that Dave gets a new victim from earth in the form of a little girl and propositions her to decide whether his stories about paranormal happening in Duluth are true or false. The theme of jarring cuts comes back as the first story is told in a narrative fashion, I won’t go into the details of this story, however it’s jarring when the next story is told because it completely changes points of view from narrative to reality.

The camera operator is now the host in story two and I imagine Gravedigger Dave primed the little girl with the story by first telling her about his camera setup. ” So I followed this woman into her basement and saw weird ass cuffs stuck to the ceiling…” With the jarring change of view the tone of the film still shows through because the woman the camera op is following around is weird as hell.

The film doubles down on it’s POV shifting style with Dave telling stories about how he interviewed ghost hunters in Duluth and abroad. It becomes more apparent throughout the film that Dave is a huge fan of people who investigate the paranormal. The film walks in-between showing a dramatization of stories recorded and displaying interviews like a new reel. The result is a bizarre pace jumping story to say the least.

As the film mulls on past the 30 minute mark the visual, sonic, and contextual elements of the film fall apart. The music becomes a soft, unending drone, the visual is a B-roll heavy sequence of old buses underneath a man who is rambling about everything but buses. The next two thirds of the film follow the same inconsistent and uneasy style of shifting points of view.

Grave Digger Dave’s Halfway House started with a clear and powerful energy with Gravedigger Dave’s fast talking establishment of his character, and a solid foundation of where the film would go by showing and telling a series of paranormal stories. Unfortunately, about a third of the way through Dave becomes less like a crazed graveyard enthusiast and more of a news anchor and the stories completely abandon the narrative style and instead get swallowed by the dry, and formulaic sequence of local news editing which involves interviewing somebody and filling up every cut with b-roll. As a result, the scariest and most paranormal thing about this film is it’s run time.

P.S I loved the ending!

Go see Gravedigger Dave’s Halfway House for yourself! It premieres at the Zinema 2 in Duluth, Minnesota Sunday, March 1st at 1 pm