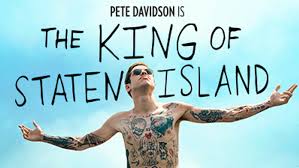 Scott has been a case of arrested development since his firefighter dad died. He spends his days smoking weed and dreaming of being a tattoo artist until events force him to grapple with his grief and take his first steps forward in life. (IMDB

Right off the top I want to talk about an editing quirk at the 1 hour and 5 minute mark. Scott sees his estranged girlfriend in the restaurant with another guy he talks to them and she gets up and runs out of the restaurant. When the angle cuts back to the master shot the next cut is the same shot with a bit of time shaved off in between. The result is the characters looking like tele-porters and cutting to the exact same shot is a big editing no-no. Okay on with the review.

Scott (played by Pete Davidson) is a stay at home son who is still guilt stricken from losing his firefighter dad years ago. His life changes when his mom Margie (played by Marisa Tomei) meets a new man and they hit it off. Scott and the new guy Ray (Played by Bill Burr) have friction bond by the end of the movie. The pacing of this film feels slow and it shows with it’s hefty two hour duration. Scott’s habits are nearly see-through stereotypes of a person who is estranged in life and Ray is an imperfect, but honest man that loves Scott’s mother. The film definitely plays a more intimate role of telling the story of Scott’s life. Much of the film is shows who he talks to and the trouble he gets into, most of his traits are one a note telling of a drug addict, but this film presents an arc in that same light. At the beginning he’s reckless with his friends and non-committal to his girlfriend who all sit around and smoke drugs. As the movie progresses and Scott and Ray are both kicked out by Margie ( played by Marisa Tomei) is forced to rely on himself he turns to Ray for help.

One of the better moments of this film was when Scott was let into the firehouse and bonded with all the guys there after initially trying to goto a baseball game and call it a day. I like how the realism of Scott’s situation was used to force him to bond with Ray. The film wraps up nicely with Scott’s decision to commit to his girlfriend and help her get the job she wants and Ray helps Scott move on from losing his dad. Overall the rise and fall of this movie was not very high. There was little to look at visually as this film was a dialogue heavy character study and the characters especially Scott were enough to carry the movie to a nice finale.

On a side note: Bill Burr is one of my favorite comedians of all time and his performance in this flick was very entertaining to watch. His sports knowledge busted the forth wall of his character and I love that his quotes of oddball sports facts made it into the final cut.

Overall I like this film and it’s beautiful moment at the end. I felt like it was wrapped up nicely as a mellow-drama